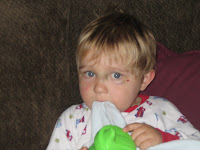 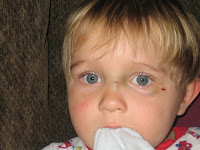 So Sean has always been a crazy boy and beating himself up, but I think this time he topped all other injuries he has had. The sad part was that he did not do it while trying to do some stunt or something fun. What happened was the other night me and Greg were putting him to bed and I was laying Sean down in his bed, when he decided to bend his knees and jump forward as soon as I laid him down. Which in turn he did a face plant into the headboard. What you must remember is that Sean's headboard has shelfs to it which makes for some sharps edges. Sean cried out in pain and just wanted to be held for the rest of the night. Of course he wouldn't let us put any ice or anything on it. These pictures don't do the injury justice because it was alot worse the third day but I forget to get a picture. Luckily Sean is still in one piece and running around like crazy and exploring the world.
Posted by The Mcclellan's at 1:23 PM

That is so sad! Those pictures are too funny-with the blanket in the mouth!
When are you guys coming to visit? We'd love to have you soon! Do you guys get this weekend off?

We are around next weekend. My parents are coming into town but it'd be fun to have everyone. We've got plenty of room for both of you. Maybe we could even get my parents to stay home with the kids while we went out or something. Anyways, let us know if you want to come!