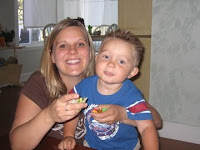 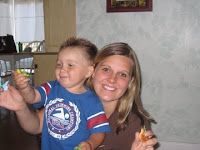 So now that we are heading into summer and it is starting to get warm here we decided that it was about time to cut Sean's hair. The fact that Sean kept trying to push the hair out of his eyes was a big clue that it was time to cut his hair. It's amazing because his first hair cut was almost a year ago. Man time goes by fast. I was a bad mom and forget the camera for the actual haircut, but I got some after pictures. Sean was such a big boy. We took him to a kid haircutting place so they had toys everywhere and only cut kids hair. So he sat in the chair by himself up on pillows and sat there and played with the toys the whole time she cut his hair. He was such a good boy and never threw a fit. After words they gave him a balloon which made his day. To add on to that we promised Sean he could go spend his one dollar and get a toy if he was a good boy. So we all went to target where Sean bought a bag of little plastic bugs. He was loving making the bugs fly around and fight with each other. His word for pretend fighting is "PO PO" its so cute, he'll make fist and pretend like he's fighting. He's getting so big.
Posted by The Mcclellan's at 9:39 PM

Cute haircut! I can't believe how big it makes him look. Tell him Happy Birthday from us! Looks like you had a fun one. I need to chat with you to see if you have any info for me about Sea world.

Okay, I am glad I read the description of your pics because I thought you gave him the haircut. I wanted to know your trick of getting it so perfect because Abigail flips out when I trim her bangs. He looks adorable!