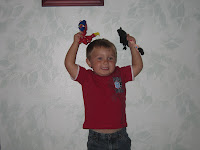 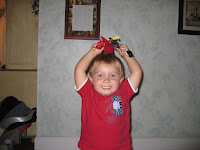 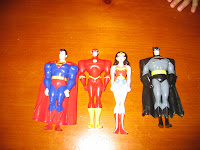 So since Sean has been so great lately with helping out with Brianna and trying to do his best to listen and do as he is told I decided to go buy him a new toy. Well you see we were at the park right before we went to the store and this little boy was playing with these super hero characters and he was nice enough to share with Sean and I have never seen someone so excited about a toy. So we set out to Target to find these super hero's and we lucked out finding them and even better they are swimming toys too. So the first three days Sean had these toys he would never put them down or share with anyone. I've never seen him so protective of something he was so funny. On top of that he was so excited about them the first night he had the super hero's at home they had to go to bed with him and low and behold Sean woke up at five in the morning wanting to play with his super hero's. Luckily the newness has worn off so were not waking up in the night but he is still loving to play with them. He has been so great as helping with Brianna, the other day I was busy doing something and Brianna was crying and I saw that her headband had fallen in her eyes but my hands were full so Sean was so cute he went over and very softly took her headband off and they proceeded to try and give her bottle. I cant believe how much Sean has grown in the last three weeks since Brianna has come home, he's taking this big brother role seriously. Last Wednesday Sean said he first prayer and it was so cute, of course everything was one word and really short but so cute to hear him thank heavenly father for his family and friends. It melted our hearts.
Posted by The Mcclellan's at 2:00 PM