They grow up so fast!! 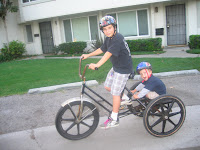 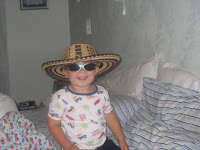 Well its so crazy how fast your kids grow up. It seems like just yesterday
Sean was just figuring out how to walk. Now he is running around, climbing,
and jumping. I love to see how his imagination has taken off and how is so interested
in everything. His new thing is to say for about everything he says "mommy what's that"
and he'll keep saying it until I say back to him "Hey Sean what's that." I love this
stage. Also he has made good friends with all the neighbor boys. They are all around eight
to twelve but they love Sean and every time they see him they are saying hi and asking
Sean to give them high five. So the other day one of the boys was riding this new bike
he got and wanted to to take Sean on a ride and of course Sean loved trying to be just
like the big boys. Tonight Sean found Greg's hat from Columbia and so he decided to put
it on with his sunglasses and he said "mom I'm Dora" so this is Sean pretending to dress
up as Dora. I love this age right now. Lately Sean as turned into shy boy if he hasn't seen
someone lately he gets all shy and tries to hide from people, its so funny to watch. His
preschool teacher says he's doing great on his numbers and letters. His favorite song
right now is "ity's bity's spider" with hand actions. 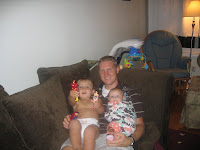 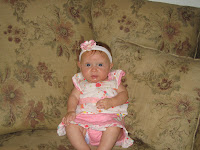 Brianna is 4 months old tomorrow and has changed so much. I used to think people
were making up stories when they said girls were so much different than boys but I
believe them. Brianna loves to be loved and held, where Sean not really, also she has
already started to coo and babble and even laugh, where Sean didn't talk until he was
like 6 months old. Also she always wants to be involved and watch everything that
is going on. We have had so much fun with her and she is such a good baby. Overall
she is mellow and loves to just be involved. Everyday people say how much she looks
like Sean and i must agree expect she has some red in her hair and I don't think she'll
be as tan as Sean. I am loving having a little girl and making her all girl. I have now learned
how to make headbands to go in her hair, paint toenails as she is kicking, and put on lots
of cute dresses. I can't wait until we can go shopping for dolls and jewelery it will be so
much fun.

Happy Anniversary! Looks like you had a fun vacation! Thanks for letting us play with your kids at church! Good job on your talks too!

They are so adorable it looks like yo guys had tons of fun on your anniversary. I would love to go to malibu. I told you they grow way to fast. She definently has red hair she is so cute.

Cute kids Annie! I can't believe how big they look, and Briana's smile is to die for! Nick and I need to take lessons from you guys for anniversary get-a-ways! It looks fantastic!