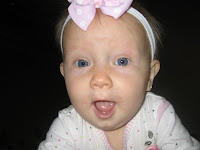 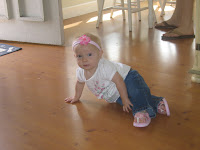 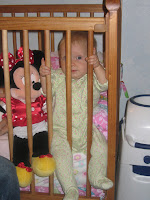 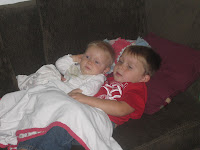 Well Brianna is already 9 months old. She is starting to look so much cuter. I will be the first to admit, those last couple of pictures she was looking funny. We are having so much fun with her. This last month she has started to coo alot more and loves to play patty cake and peak a boo. She is so cute and her laugh makes me laugh. She is getting her two top teeth and wants to eat big people food so much. As you all know its really hard for them to eat big people food until they get some opposing teeth so we cant wait. So as you can tell she is still really small. We took her to the doctor for her 9 month check up and for weight she is only 5% so Greg came home trying to think of ways to fatten her up, so far nothing is working. She seems against food lately for some reason. Brianna is doing so well at getting around and trying to keep up with her brother. She also loves to eat leaves so we really have to keep a close eye on her. She is so much fun and we love her so much.
Posted by The Mcclellan's at 8:35 PM 3 comments:

They're Getting So Big! 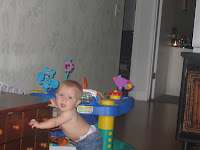 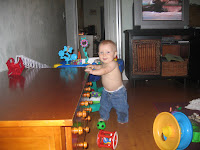 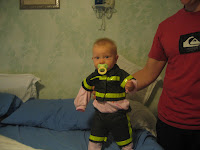 Well we have really been slacking on keeping up on our blog. I'm so sorry. Life has been crazy. I have been working a lot more so by the time I get home I am so tired I don't want to do anything else, including bloging. Well Brianna has gotten so big and so adventures. As you can see from the pictures she has learned to pull herself up on everything and stand. She is very adventurous. She finds places that Sean never found and tries to crawl into every corner of the house that she can. She is so much fun. But she is still our little girl (literally, as you can see, she is wearing the firebear uniform from a build-a-bear!). Whenever she gets excited she starts flapping her hands around and usually ends up slapping us, but its so cute. I love watching her grow and explore and learn so many new things.

Sean got to go to preschool for a little while and was loving it. He would come home and sing the new songs he learned or show me the art project he made. Sean will definitely be my social butterfly he loves being out and meeting new people. We had a moment of "oh my goodness he's a big boy" with Sean the other day. We took Sean to get new clothes and he insisted on picking out his "own" clothes and then on top of that he wanted to pay for them (by himself) and then he wanted to carry all his bags. Then when we got home a boy from the neighborhood came over and asked him to come out and play but Sean was like "no I'm ok", until the boy asked him to come over to his house and play x-box. That seemed to change Sean's mind. He looked at his dad and said "I go play with my friend", so he headed across the street to play x-box with the 8yr old boys. And Early that morning he decided that he wanted to make his own pancakes. So Greg let him mix it together and supervise while Greg put it on the griddle. I cant believe how fast they grow up. Before I know it Brianna will be talking and walking around. We are having so much fun with the kids.
Posted by The Mcclellan's at 1:58 PM 6 comments: