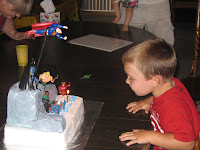 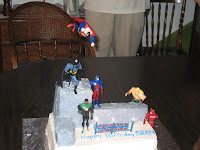 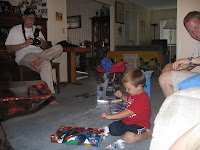 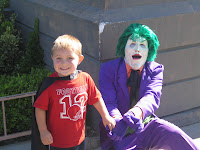 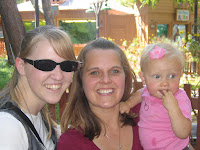 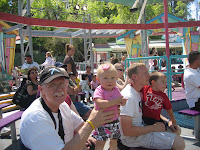 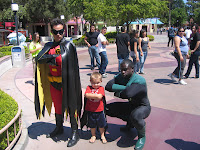 Well Sean has been talking about his birthday for the last month, he was so excited when it finally got here. He is one spoiled boy, but so cute. The birthday celebrations all started Thursday (the day before his birthday) he had cupcakes and a little party at preschool. His teacher made him a birthday sign and a special crown that he wore all day. Then on Friday (his actual birthday) he got to open his first gift which was a pirate island which he played with all day, then he had hamburgers and chips and his favorite diet soda, he thought the soda was the best thing in the world. On Saturday we took off to Valencia where we went to meet up with Greg's family. We all went to Six flags where Sean got to see Joker, Robin, and Green Lantern (his super hero friends), after that he got to go ride roller coasters and a bunch of other rides. After Six flags we went back to Greg's parents house where he got to eat his awesome super hero cake (that Greg's mom made) and open all the rest of his presents, he got tons of spider man toys and a batman cave (its this cave that opens up and the super hero's can fight the mean guys), its so fun to watch him play and pretend. Also he got two light sabers so him and Greg can fight each other. He got an awesome Green Goblin from my dad which is his favorite mean guy to fight and beat up. I cant believe how big he is and how much he has changed in the last year, he could barely talk last year and now he says full sentences and very observant. We love you Sean. Happy 3rd Birthday!!
Posted by The Mcclellan's at 8:25 PM 4 comments: 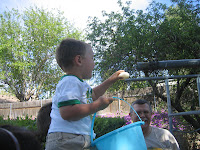 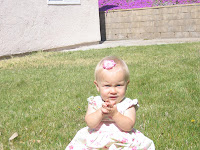 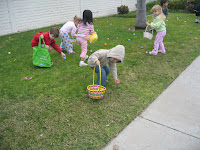 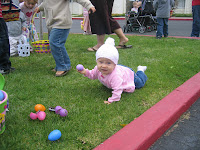 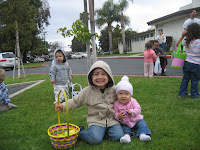 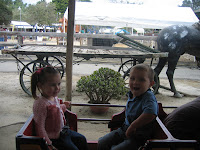 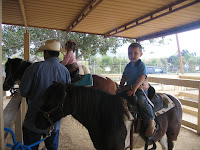 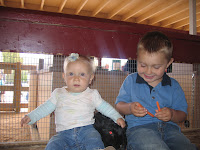 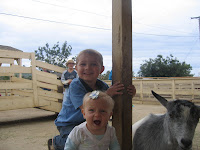 Well we had a fun filled easter weekend. It all started Friday I took the kids with my friend Jillionnie to a petting zoo where they had bunnies at this time of year. The kids loved petting all the animals and Sean even got to go on train ride and ride a horse. Poor Brianna got bit by a bunny I think the bunny thought she had food so he tried eating her, she was not excited about that. On Saturday we went to a breakfast and egg hunt at church. It was so fun to see all the kids runny after the eggs and see who could get the most. Brianna had no idea what was going on, she just wanted to chew on the eggs. Then on Sunday we headed up to Greg's parents house where the kids got spoiled to death and had a blast. We did an egg hunt in their yard where Sean found most of them but Brianna crawled around pretending to help. They got a ton of fun toys and kites from nana and papa. That is what Sean calls his grandparents. Thanks guys for everything you do. Greg's mom also made an awesome easter egg cake and Greg made great homemade rolls that everyone loved. It's so fun to see the kids growing up. Brianna has such a personality. She loves to clap her hands and try waving to you. She stills thinks Sean is the funniest thing in the world.  We had so much fun. Happy Easter!!
Posted by The Mcclellan's at 9:18 PM 1 comment: