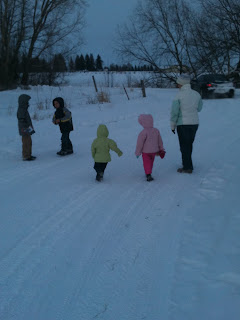 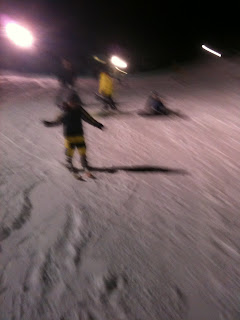 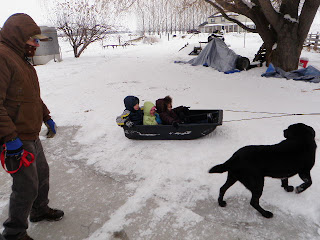 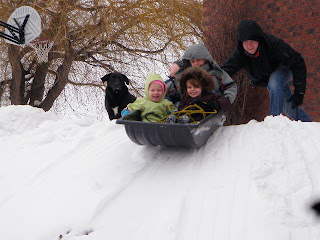 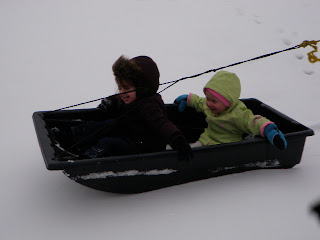 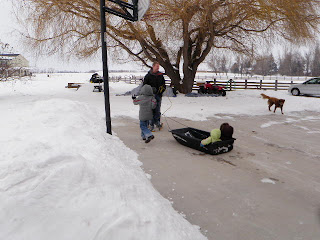 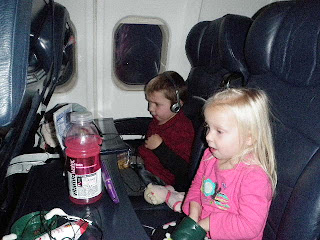 So we lucked out and were able to go back to Idaho in January and they have this awesome airline that you can fly straight to Idaho Falls which is the city right next to Rexburg. So now no more driving 14 hours to go see my family and the flight was cheap. I am in heaven. Bri loved her first flight and her and Sean did so well. I love Idaho for multiple reasons. 1- Get to see my family 2- The kids can go anywhere on the farm 3- The kids love playing with their cousins 4- I get to go skiing 5- Get to ride snowmobiles and go sledding. Every morning Sean would wake up early and want to run outside and play in the snow. He also had his first sleep over with his cousin Kyler and he did so well didn't even cry. I think I had a harder time than him. The funnest part is we got to take Sean down hill skiing. He did so well and had so much fun. We took him and his cousin Kyler and they both did so well at skiing. We took them on the bunny hill but Sean kept asking to go on the big hill. At one point Greg carried Sean up a little ways on one of the big hills and Sean snow plowed down like it was no big deal. Bri got to hang out with her cousin Kambrea, she even loved the snow. When we took her sledding behind the four wheeler you could see her shaking because she was so cold but she refused to go inside because she loved it so much. Bri also loved feeding the lama's, cows, and horses. They both wished they had a dog after we left. I think we may have to get one in the future. Thanks dad for letting us stay and helping us take Sean skiing. At the end of the trip it was really nice to come back to the really warm weather in California.
Posted by The Mcclellan's at 8:10 PM No comments: