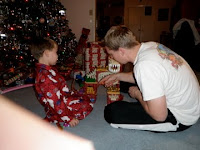 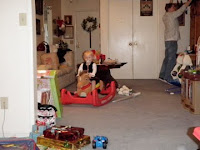 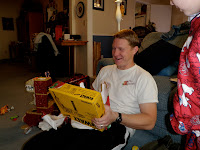 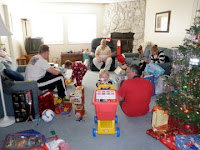 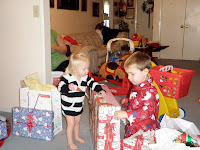 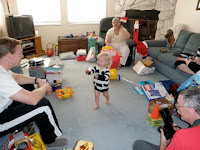 This year Christmas was so much fun. The kids were so excited and all they could talk about was Santa and when he was going to come visit. Even Brianna was calling Santa HO HO. I loved watching them open their gifts and how excited they got. Sean was so cute because even when I was opening up stuff he would come over to see if I liked them. We celebrated with Greg's family and had such a good time. We hope you all had a merry christmas.
Posted by The Mcclellan's at 9:48 PM No comments:

So the kids had a wonderful Christmas Party with their little friends and family from Preschool. It was so cute. They all got dressed up and we had some great food. Then the kids put on reindeer ears and sang some awesome christmas songs. It was fun to watch Sean singing the whole time and doing exactly what he's suppose to. Where Brianna was wondering around and always trying to be in the front, but did an excellent job of dancing and trying to sing. They were all so cute. They had Santa come and Santa gave them all a gift. Sean sat on Santa's lap but Brianna would only talk about HO HO but would not sit on his lap. Sean got a remote control car that he broke the next day(of course) and Brianna got a doll that is bigger than her. It was cute because for that next week she took it everywhere with her and just dragged her around. Christmas is so much fun with kids and to see how excited they get. I also threw in some pictures from the ward christmas party where they kids loved running around and dancing. 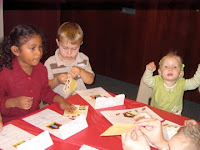 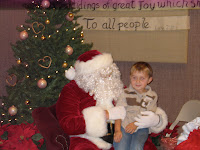 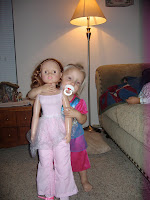 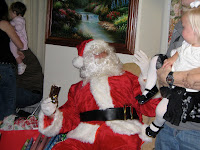 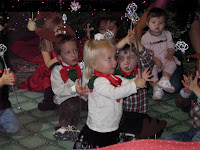 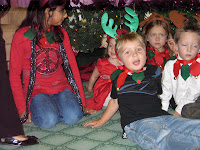 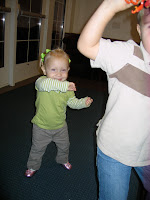 Catching up on November

Well I have been slacking and have not blogged forever. So I will try and catch you up on everything.
7. Ever since Thanksgiving Sean has been asking to decorate for Christmas so the first week of December we got out all the decorations and decorated the house. It was so cute to see both Brianna and Sean trying to help and put the ornaments on the tree. All Sean could talk about was Santa coming and what batman presents he's going to get. Also Bri has now learned how to say HO HO from us talking about Santa seeing all the decorations as we drive around. My kids love to go look at all the lights and decorations. I think this is Sean favorite holiday which is funny because its one of my favorites too. I just wish we could go see the snow but only for a few days and then back to luke warm California. 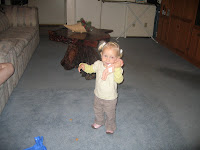 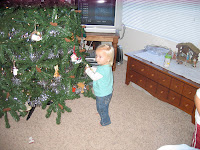 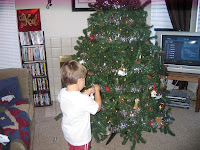 6. So after Thanksgiving we went up to visit Greg's parents where we got brave and took family pictures. It was fun and the kids did so well for how cold it was and windy it was. Here are some cute pictures we got and see how funny the kids were. At the end of the photo shoot they got to go ride some rides and six flags and they were in heaven, they love that place. It was so funny because we tired to have Brianna go on the train roller coaster with Sean but she screamed the whole way and only made it around once and then they had to let her off because she was making all the kids upset.

5. For Thanksgiving we did something totally new and went to the fire station for Thanksgiving. so Greg had to work Thanksgiving so all the families of the fire fighters met up at the fire station and had a huge feast and the kids got to run around, play in the fire truck and pretend to be fireman. They loved it after running around all day. It was so cute because Sean snuggled up in their big recliners with his blanket and watched a movie he loved it. Also i have never see Brianna be so outgoing and friendly and playing with the fireman, it was a fun new experience.
4. Going to the wild animal park and the San diego Zoo with friends and cousins. My friend Amber and her kids and my cousin Amber went to wild animal park and they have boys right around Sean and Brianna's age so they had a blast running around and playing with their friends. Bri kept up with the boys so well, she was the only little girl. Her favorite part was petting the animals. Then two days later my cousin from Utah came out with his family and we all went to the San Diego zoo where we got to see these awesome polar bears playing and swimming together. We love having people out to visit and playing with friends. 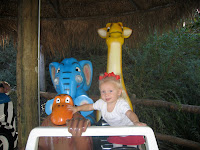 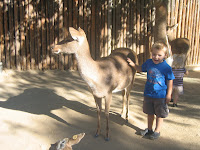 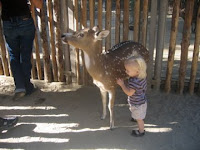 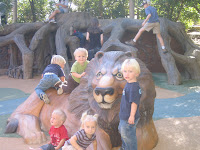 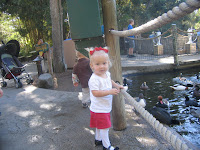 3. Still bike riding in october because it was so nice and warm in october and we were loving it. Sean does so good at riding his bike now and can keep up with us and even ride up hills and down hills by himself. Im amazed at how big he is getting. Brianna is talking so much her favorite word is "no" and she can say more, up, and food. It is so cute. She is so cute and fun. 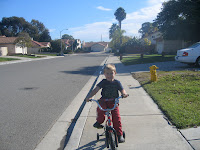 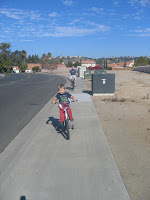 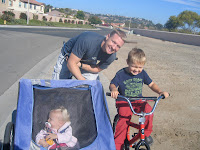 2. I passed my big test so I am officially a diabetes educator(thanks greg for watching the kids so I can study) I am so impressed with mom's that go back to school while the kids are young.
1. Brianna officially can go to nursery but of course I can't not get her to go but well keep trying.
I just want to wish you all a Merry Christmas!! Love The Mcclellan's
Posted by The Mcclellan's at 9:43 PM 4 comments: