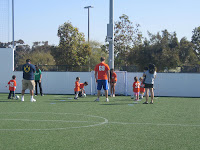 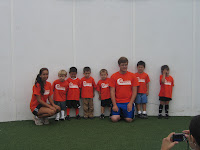 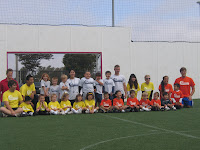 So two weeks ago we put Sean in a city Soccer team, just to get him out and running around. See if we can run off some of that energy. It's so fun to watch him. So far all they have done is learn how to stop the ball, pass it to each other, and kick it in the goal. They have three teams and Sean is the orange team called orange lions. This week we took team pictures so here's some pictures of his soccer team. Three of his friends also play, two of them play on the gray team and then our next door neighbor is on Sean's team. They are so cute.
Posted by The Mcclellan's at 6:01 PM

That is so awesome. Bryson is in soccer too and loves it. It is so fun watching them chase the ball around like ducks they all flock to it. Enjoy!

How fun! I need to put Damon adn Landon in somehting like that to burn off some energy. I bet Sean loved it!