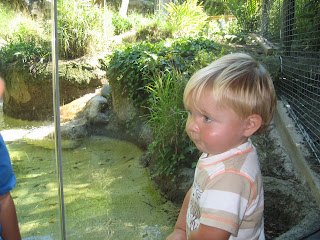 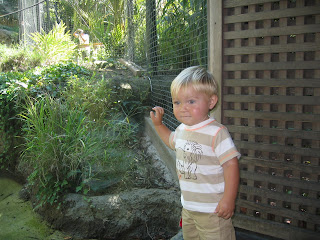 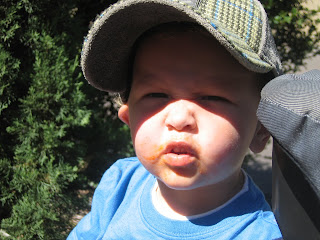 So on Monday Sean and I had the opprunity to go to the Zoo with my friend Mindy and two little kids (Case and Cameron). It was so much fun. Now that Sean is older and understands that they are animals and even knows the noises that some of them make, it made it so fun to watch him and his friend Case point and laughing at all the animals. The boys were great and even stayed in their strollers. Towards the end of the day the park got really crowded because it was free day at the zoo. So we all got stuck in a walking jam on the sidewalk at the zoo and everyone was trying to push and jump in front and no one would take turns. It felt like I was driving on the freeway. As you can see Sean was trying to tap on the window and talk to the monkeys, but they kept running away. Its fun to see how much Sean has changed since last year when we took him to the Zoo.

How fun! I love your new family pic you put up too. You guys look so fancy. Were you in a wedding?

Too cute! It is so fun when they start getting into those things! I've heard amazing things about that zoo. Wish we had one here!