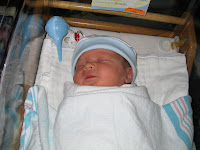 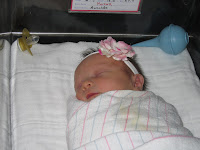 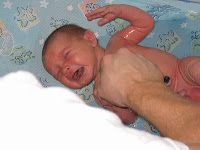 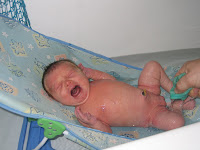 Well as you all know we have a new addition to our family. Brianna is so sweet and so much fun. Sunday was our first day as a whole family and it was fun but quit interesting. Sean wanted to do everything for Brianna and help with everything, which is great but as some of you know hard because he can't do everything. Well our first night was really rough both the kids were up from midnight until four am, luckily Greg was there to help so both kept taking turns with Sean trying to get him calmed down. See Sean feels bad and wants to help when he hears Brianna crying. So last night we got smart and turned on his radio in his room and for the most part he seemed to work, he only woke up once last night. So we are slowly but surely adjusting to having a newborn. So as I put on the title (so much alike) Sean and Brianna are so much alike its crazy, one as you can see from the pictures they look a ton alike, two they both love to spit up everything they eat, three they both hate getting their diapers changed, and fourth they both totally have their days and nights mixed up and fifth they both were born breech (Brianna decided to change position the day before she was delivered, good thing we had a scheduled C-section). It's so weird because Brianna reminds me a ton of Sean as a baby. I guess that's good in a way because I should know what to do since I have already done it. The one big difference between the two is Brianna is so small and so light, we like to call her misse moo or peanut or Sean calls her Bri, that is her nicknames for now. We are so excited and loving having Brianna in our family. I'm so thankful she came out healthy and strong.
Posted by The Mcclellan's at 12:17 PM

Congratulations on the new baby, she is absolutley beautiful!

Congrats Annie! She is so beautiful and definately a girl version of Sean. I am so happy for you! Everyday gets better after having two. You are an adorable family! Love You1

She's so beautiful, & Sean is adorable as ever. Congratulations you guys! :)
-Britney

Hoooorrraaayyy! She is beautiful - I wish we were there to meet her. Maybe this summer. Congrats to you all!