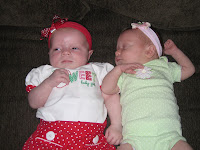 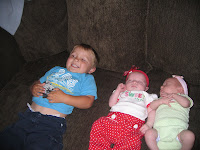 So Jillonnie and I finally got together after having our baby girls. We both had beautiful baby girls about two weeks apart. It was so fun to sit and talk about our baby girls and what they are doing and of course getting advice, since Jillonnie now has three kids so she had some good suggestions on how to juggle two kids. We got to sit and chit chat while the baby girls hung out on the couch. Sean was so excited about the two baby girls that he kept trying to get in the pictures. Brianna looks like such a peanut compared to June. They are about two pounds different in size. June looks so much like River, its so cute. I really do miss having Jillonnie around she was great at always wanting to hang out and easy to get along with. I would always hang out with her and her family when Greg was at work and I was home alone, now she has moved to Murrietta so I can't just go over to her house and hang out for a little while. At least we still get together as much as possible. Jillonnie your a great friend.
Posted by The Mcclellan's at 10:11 PM

CUTE, YOU GOT THE GIRLS TOGETHER ALREADY!
I KNOW JILLONNIE LOVED LIVING CLOSE BY YOU TOO!
GLAD YOU GUYS STILL HANG. FOR SURE THIS SUMMER AT THE BEACH TOO!

thanks Annie. I miss hanging out with you too. I love how close in age the two girls are, it will be fun to see how they grow up together. I'm looking forward to seeing you more this summer now that you don't have to work on thursdays, the offical beach day.