Universal Studios with the Hills 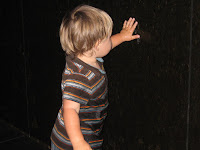 So on Saturday me and Sean decided to be adventurous again and take a trip to universal studio's or city walk. So Saturday afternoon we packed up in the car and drove in good old LA traffic for two hours to go to universal studio's to have dinner with my cousins from Idaho. My aunt Valyn and all her kids and husbands were in California getting ready to go on a Mexican cruise the next day. So first off my cousins were staying in a hotel in Inglewood ( which if you've been there not the nicest area, especially for small town people), second they had no transportation so they took the LA metro to go to Hollywood and universal studios. They said they were a little worried on different parts of their train ride but overall had a fun time. So me and Sean got to eat at Bubba Gumps and spend some time with all my cousins. They were amazed at how big Sean is and also how active Sean is. So as you can imagine Sean did not hold still for one moment while we were eating. After dinner he found water that sprays up from the ground and trickles over the side of a box, so of course cause Sean loves water he played in that the whole time and was in heaven. He was soaked by the end of the night but luckily I came prepared with pajamas. We had so much fun spending some time with my cousins we only get to see them once a year so anytime we can see them we love it.
Posted by The Mcclellan's at 1:21 PM