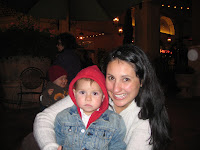 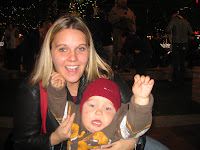 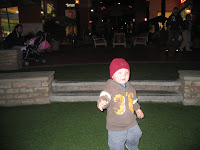 So can you believe that we have snow falling in California. OK, we really don't but they like to make us feel special so the mall up the street from our house puts on a little show every night of fake snow falling around a Christmas tree and Christmas music playing. It was actually really neat to watch. Me and Sean went with my friend Melissa and her little girl Ashley (who is a month younger than Sean). Sean and Ashley were loving it. I didn't get the best pictures because my camera was dying but the kids were running all around and trying to catch the snow. We also found out that Ashley is alot better climber and stair walker than Sean. Ashley can full on walk down steps on her own where as Sean still sits on his butt and scoots down the steps. After an hour of running around the Christmas tree and eating dinner, we dragged the kids off to the car kicking and screaming. And I mean literally kicking and screaming. They did not want to leave. I'm really glad that we went. It got me even more excited to take Sean home to see snow. Sorry you can't see the snow in the pictures, I promise there was snow falling.
Posted by The Mcclellan's at 8:57 PM